Ever since I left Quicksilver for Butler, and later Alfred – I was left with a batch image-resizing itch. To scratch it, I wrote this applescript (and Alfred extension). The script will ask you what to do, and takes your selection in the frontmost finder window, and performs image manipulations on it (Using a command line utility called “sips”). 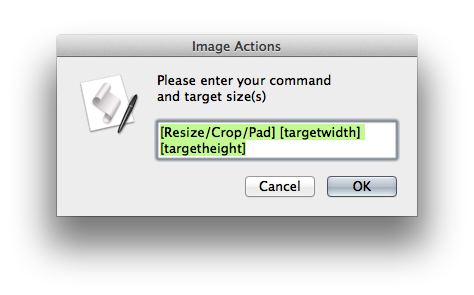 Crops the image(s) to the given dimensions. If only one value is entered, uses this for both sides.

Pads the image(s) to the given dimensions. If only one value is entered, uses this for both sides.

To use this script with Alfred, you’ll need to get the powerpack too, which was totally worth it for me.

Grab the script here!
FYI: SIPS (and as such, this script) supports the following file formats: jpeg | tiff | png | gif | jp2 | pict | bmp | qtif | psd | sgi | tga – I tested it on a psd, and it worked, but be aware it flattens the file :) Also, no, the script does *not* check beforehand if you have the right kind of files selected.